We had picture perfect weather for the decorated boats, Jukung Hias, competition on 20 May. Its an integral and dramatic part of the annual Isen Mulang Festival in Palangkaraya. Festival dates never change and are from 18-23 May, though the boats may sail on any of the days. Isen Mulang is 'never give up! and it celebrates the independence of the province of Central Kalimantan as a Dayak homeland from South Kalimantan in 1957.

Ritual decorated boats or bamboo barges are used in tiwah or secondary burial ceremonies in some areas, symbolising the boat of the dead carrying the departed spirits to Lewu Tatau, the Prosperous Village. Rivers are the highways here in both the living and spiritual worlds!

These competition boats are sponsored by different local Government Departments, Provincial and Regional, or organisations. Rivalry is intense, giving decorations that riotous colour, dominating green, red and yellow, favourite colours in the Dayak pantheon. The smaller canoes, klotoks, carry judges, who follow the boats and rate them for the final prize giving, based on the appearance, themes, and quality of the dancers and musicians.

Why not join us next year! Drop us a line at wowborneo.com. 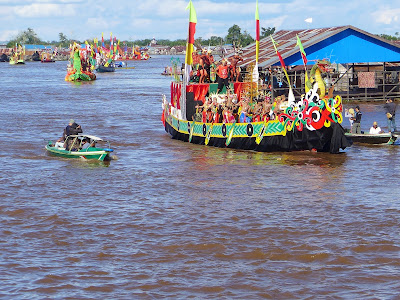 The spectacle of boats move along their short course in the Kahayan river, with the city of Palangkaraya and its floating and stilt villages along the banks 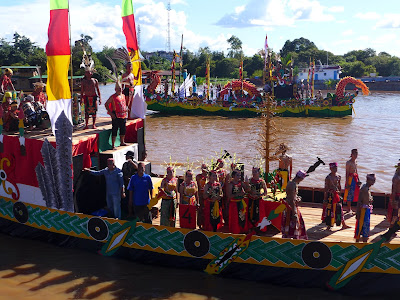 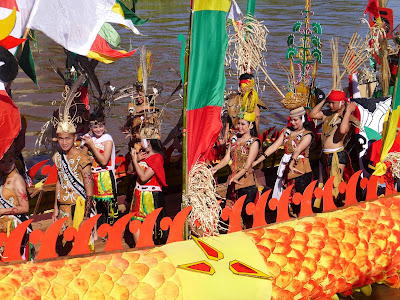 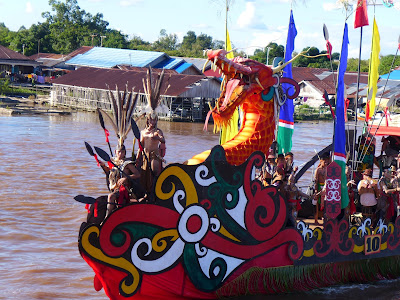 The feisty dragon is the water spirit 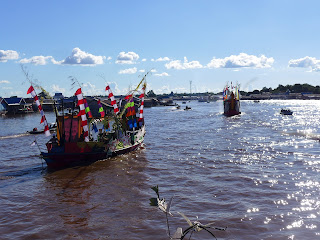 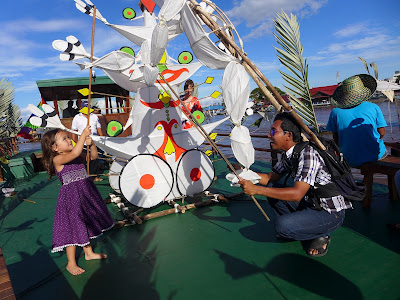 A group of young puppet makers and performers from Australia, here to work with local children, helped to create the decorations for the Rahai'i Pangun I, as we entered into the spirit of the day. Our theme was the Batang Garing, or Tree of Life, which was accompanied by hand held puppets of birds, fish and animals. Here is little Amaliyah having fun with the full man size puppet. 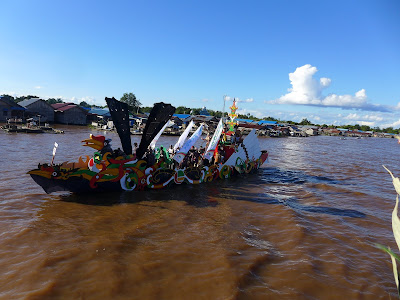 This was a favourite of many - the huge hornbill perched as if to alight, with flapping wings. 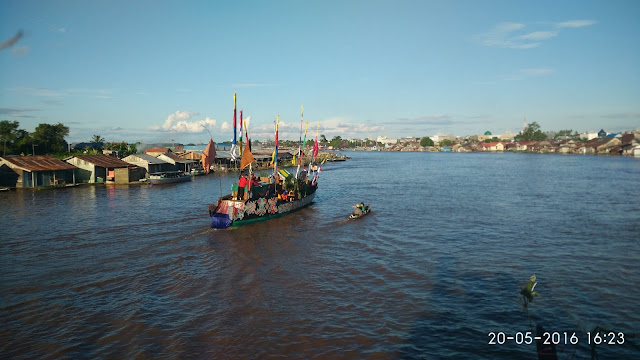 Homeward bound, poignant in the late afternoon light on the now quiet river.